Problem and purpose. The present article is devoted to the ways of creating artistic unity in Dmitry Vodennikov’s cycle “Bur”. The article suggests a possible experience of interpreting the cycle, built on the analysis of the special view of the lyrical “I” worldoutlook.

The methodology of the “Bur” analysis is determined with the artistic integrity of the cycle being a single metatext. Separate poems within the cycle interact with each other, so that the meaning of each of them is complicated and expanded. Semantic unity also generates a formal unity: interaction and roll-call of images, compositional techniques. It is through the semantic and formal rolls in the cycle that the unity of the development of the lyrical “I” – the consciousness of the lyric character is achieved.

The results. It can be said that self-discovery and self-awareness form the basis of the inner lyrical plot of this cycle. The lyrical character of Dmitry Vodennikov, holding together seemingly disparate, multi- thematic poems, is the main element creating the cyclic unity of the “Bur”.

Conclusions. The fundamental element holding the artistic unity of the “Bur” is the consciousness of the lyric character. It is a child, who undergoes certain changes in the cycle. The image of the external world in the “Bur” cycle is built on the subjective-associational principle. A characteristic feature of the world im- age in “Bur” is its duality, which is existing and imaginary at the same time. Besides, it should be noted that precedent texts play an important role in the cycle. The lyric character comprehends the surrounding reality with their help. All these features lead to the fact, the compositional and semantic structure of the poems in- cluded in the “Bur” and the cycle as the artistic unity itself possess a complexity allowing to expose the cycle to various and ambiguous interpretations.

Keywords: D. Vodennikov, a lyric cycle, a composition of the cycle, a lyric subject, a precedent text, poem. 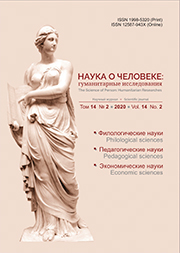